A popular bar/restaurant in India wanted to promote responsible driving to its clients. Particularly, they don’t want drunk people to drive. But instead of just giving out fliers or putting up posters, they did something much better — they literally scared the people into becoming a bit more sober right before driving.

In India, of the many supernatural beings they believe in, apparently the most fearsome being is the Hindu diety named Yama, the God of Death. Imagine him paying you a visit in your car right before you drive off… now, that’s scary. 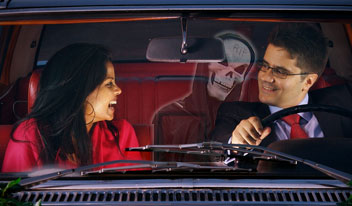 A Youtube video shows the reactions of the many party-goers (i.e. “victims”) who had a close encounter with “death himself”. In the end, the scene looks like a gag or practical joke. But I guess it drove home a good point.

If we did something like this here in the Philippines, a hooded guy in a black cloak holding a sythe may have a similar impact. But if the “victim” is way too drunk to appreciate the joke, our hooded guy might just end up badly beaten up by the same person he is trying to save.