A few Saturdays back, I was IM’d by my mother that their driver was involved in an accident. After bringing my father to the airport for an early morning flight, he was driving northbound along C-5 when he fell asleep on the wheel. The family AUV hit a Pasig city lamppost. Lamppost was uprooted from its base. Car’s hood was wrecked (along with some internal damages). 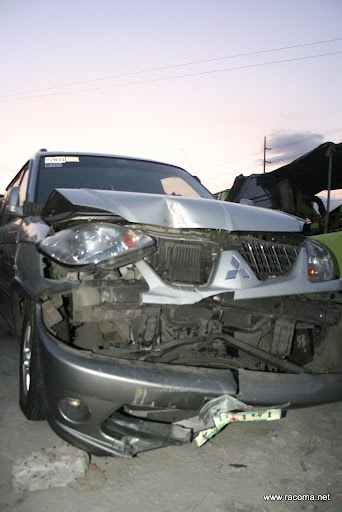 Unbeknownst to the family, the driver was also moonlighting as a tricycle driver during nighttimes and finished his shift at 3 a.m. that morning. To add to the injury, the driver wasn’t wearing his seatbelt, and hit the windshield with his head. Good thing he did not sustain major injuries (or so we hope).

Much of the day was spent talking to–and waiting for–police officers and city hall officials. We did not know about the extent of the damage until later that day, when we visited the car at the impounding area.

Lesson learned from this incident: don’t drive when you are sleepy. Sleepiness impairs your judgement and reflex/reaction time. You can also experience bouts of “micro sleep” in which your eyes are open, but your brain falls asleep for a fraction of a second to a few seconds. A lot can happen during this time, especially when you are on the road.

Much of the damage will be shouldered by insurance (payment to the city government for property damage, and car repairs), except the participation fee, towing fees and impounding fees (the car was no longer running). But accidents like this cause hassles and inconvenience to a lot of people. If there is bodily injury, then that’s even worse.

Again, if you feel sleepy, pull over to the side of the road and take a few minutes’ rest. If you can alternate with another driver, then that’s better. You can even stop over at a gas station and grab a coffee or an energy drink. Even a small snack can help keep you awake.

2 thoughts on “Don’t Drive When You Are Sleepy”