Traffic was crawling along the northbound side of EDSA the other day, and I was driving at the innermost (left) lane, turning toward the Estrella Flyover. Just before turning left to the flyover (going to Rockwell), I noticed that there were several street kids on the center island. As traffic started moving, a couple of the kids started moving toward the center of the road. I wondered what they were up to. Were they going to ask for alms? Were they just going to play a dangerous round of patintero with moving vehicles?

Turns out they were up to something more mischievous. 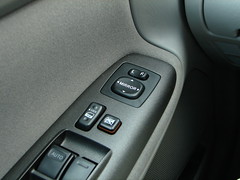 One of the kids suddenly pulled open the passenger-side door of the taxi cab in front of me. He pulled it with so much force that the door went fully open and almost hit a Honda Jazz to the right of the cab. The kids then ran back to the center island, seeming happy with their deed.

This brought back old tales of goons forcing open unlocked doors while in traffic or at stoplights. My dad once told me some men tried to force open his doors along Kamias Ave. (which is near my neighborhood).

So here’s a reminder to all motorists. Keep your doors locked. If you have a car with power/centralized locks, make it a habit to do a tactile check every so often. I click the “lock” button on my armrest several times during a trip; that’s how OC I am. Or, make it a habit to ask all your passengers if their doors are locked. This could save you a lot of trouble from potential incidents like the one I witnessed.

If you’re riding as a passenger, then make sure all the doors are locked, too. This is especially important when riding taxi cabs. For one, most cabbies are too lazy to lock their doors. Most cabs don’t have power locks, and unlocked doors make it easier for them to pick up passengers. Secondly, having unlocked taxi doors can add to the risk of being held up by robbers in cahoots with bad cabbies.

Again–lock your doors. Best to keep your windows closed, too, especially in traffic. Weather in our country is often hot, anyway.