Latest news from the Philippine Land Transportation Office (LTO) lately is that they plan to implement RFID (radio frequency ID) tagging on all motor vehicles soon. According to LTO Chief, Assistant Secretary Arturo Lomibao, this move is “a great first step in putting order in our streets,” in that it will help fight carnapping, and will also aid in motor vehicle registration, as well as apprehension (or ticketing) of traffic violators. 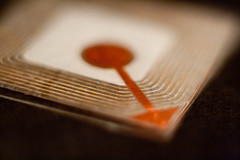 Some sectors are up in arms against this development, though, because they view it as an invasion of privacy. Party list Representative Liza Maza said that “[t]his technology raises fears that it might be used to violate the right to privacy of individuals. The LTO’s microchips might, in turn, be used as “spychips” for the government’s surveillance operations on those critical of the current administration.”

Critics also cite the PhP 350 fee for an RFID tag sticker to be another burdensome cost that motorists would have to shoulder, aside from the regular motor vehicle registration fees.

However, Yugatech cites some potential advantages of this scheme, which includes ease of paying fines for traffic violations, faster registration renewal, and as a crime deterrent. Some other possible applications were raised, too, such as integration of e-Pass and even parking passes, which could be a great convenience to those who line up every day at the tollways.

RFID is a short-range wireless communications technology that lets a tagged device emit a weak signal that can be read by a scanner. The tag contains a pre-set amount of information that can be useful in several applications, from inventory management, staff/student identification, asset tracking, mobile payments and the like. An RFID chip usually has a lifespan of several years, and is often inexpensive to produce and acquire (particualrly if en masse).

RFID tags are commonplace in bookstores and libraries, for tracking inventory and preventing theft. These are also used in the logistics industry, for tracking shipments and deliveries.

RFID could be the solution to the Philippines’ traffic and carnapping woes, especially in the Metro areas. Yes, it might be used as a spying device, but if you don’t really have anything to hide, then you shouldn’t be afraid, right? (I wonder if they will also apprehend you for going out during color-coding days.)

But perhaps political harassment might be a different scenario altogether. And then there are those that say it’s tantamount to being the “sign” of the “beast,” in biblical terms (recall that Cain, in Genesis, was “tagged” in the forehead with a symbol so that everywhere he will be recognized; this sybmolism also appears in Revelations).

Also, if RFID were to be a deterrent from carnapping, what’s to stop the often ingenious carnappers from just removing the tag as they speed away with your car?

Now the question here is how welcome this move will be with the Filipino motoring public. It’s a question of acceptance. In my opinion, our traffic problems go deeper than any technology, innovation or even traffic scheme. It’s an issue rooted in discipline and driving attitude. If everyone were an educated and courteous driver, then all our traffic problems would disappear or at least be easier to manage.